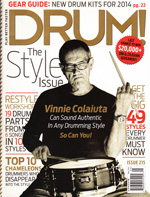 For many working drummers, the matter of how to learn and play various and often unfamiliar styles is an ongoing and crucial aspect of their musical careers. For some valuable insight on how to learn to play new styles and, just as importantly, to develop the capacity for variety, we hear from Vinnie Colaiuta, the drumming chameleon whose work with Sting, Frank Zappa, Megadeth, Herbie Hancock, Queen Latifah, Celine Dion, and about a jillion others is inspiring for the sheer diversity of its scope, and for Colaiuta's mastery of some pretty wildly varied genres.

It's not as if Vinnie Colaiuta just decided at one point to learn to play different styles, and indeed it wasn't always easy for him to adapt to them. The Republic, Pennsylvania lad instead found that it was much easier to learn a new style of music if you actually liked it.

Let's just say what I didn't do was try to seek out many different playing styles, because I was thinking, "Well, I'd better be able to do this to be a big session kingpin", or anything like that. I just like a lot of different kinds of music, and I like quality music regardless of genre. I've never looked at it like, "Well, this is really hard and, damn it, I have to learn this style!" I just like it first.