Outside, it is a beautiful sunny afternoon. Inside Vinnie's hotel room, he is asking who Anthony Blunt was as he rolls a pair of sticks around in his hands, waiting for the car to take him to tonight's venue, where once again, he will be back on stage with Sting. 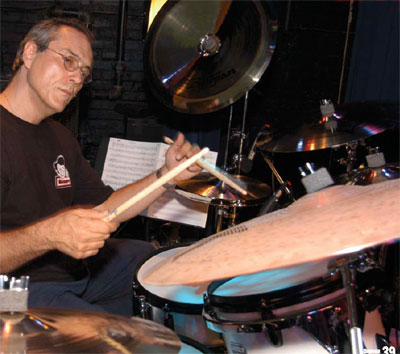 They called me up and asked me if I could do these promo shows with Sting. For whatever reason, they needed someone to do it at the last minute and I happened to be available. It's not, "Oh, Vinnie's back with Sting again and he is going to be touring all over the world with him for many years!" The reality is that I've been asked to perform with him just for these shows. I think that they did not have the whole band together and they figured that if I could do it, it would make things a little easier. This way they did not have to audition, or rehearse players and go through that process. I did some work on Sting’s new record, so I guess it made sense for them to call me to do this short run. It feels really great. It's like pulling on your favourite pair of boots and you know that you'll never get another pair that fits so well ever again!

You have been busy with other artists and that has to help maintain the balance for you. Faith Hill was very big and the live show got a lot of attention.

That was great. We did the record at Sky Walker ranch with mostly an LA crew. Then, a bunch of TV specials, some award shows, including the Grammys came up and we went and played for the troops. It turned out really nice as I was able to stay home and balance it out with some gigging, plus, Faith is just so fantastic to work with.

She had been invited to play the Grammy's and right at the last minute she decided to change the arrangement of the tune we played. Some people would have freaked out about changing arrangements right at the last minute, especially at a show like the Grammy's. That can be a little risky, but she had confidence that we as a band could handle that. It was fun, turned out great and people liked it.

Surely though, it is good to step out of the comfort zone at times?

My theory on comfort zones is mixed and I have different perspectives on that. There is value in a comfort zone, as long as you don't abuse it to become complacent. If within that zone there exists, in a band situation, several people working together with a strong element of trust and a chemistry that works well, then you will be comfortable with that. In that case, that comfort zone is not a bad thing as it is a necessary environment to allow that trust to happen. That way, if there are moments where we don't know what's going to happen, it won't create a fear paralysis. You are already in a zone of relaxation, yet alertness, in order to allow you to know that you will be supported with trust. It's a great basis to work from. Life can deal you all sorts of hands that may be unexpected and then you can be brave enough to stand up to what some other people may call failure. If you become complacent, then it prevents positive growth.

Are you enjoying being back in the studio? 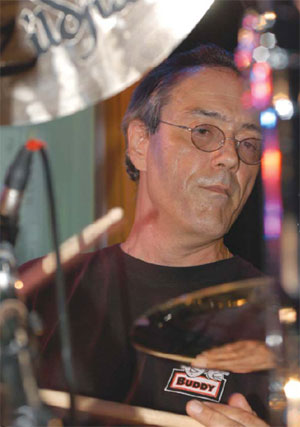 The studio has always been my mainstay. I had built up a career as a session guy and I am lucky in that respect, as I can drive home at night and stay in the same place, which is nice after so many years of touring.

The thing that attracts me to the studio, is that people have to communicate with each other musically and non musically. We have to communicate so that we embrace and support each other, rather than having our arms crossed. I am there without an immediate audience judging me, or providing me with a potential distraction. It allows me to tune that potential distraction out. I'm just trying to play the music - period. I can concentrate on just playing music and I'm not in an environment where I’m expected to just entertain somebody. That's really not something that I tend to embrace. It's not good if I sit there and dazzle people if I can't make it work as a meaningful statement, especially when I'm communicating with other musicians. It does not matter how fast or slow it is, it has to be music. Music is a language. Having a tangible language with the drums touches you viscerally, it's cosmic and it's very deep and you cannot deny it. Two words: Think Music!

When you work with artists such as Sting, how much freedom do you get with the drum tracks?

When I did the first 2 albums, Ten Summoner's Tales, and Mercury Falling, we usually started more from scratch and Sting might have a sketchy idea in the Synclavier, or sequencer. We would build on it by playing it and seeing what happens. Or, he might have a groove idea, or we'd just play and he would tell me if he didn't like something, or wanted to hear something different, and then sing his idea to me. On the odd time tunes, however, the idea of playing the cymbal/hi-hat pattern over the bar using quarter notes was Sting's idea, NOT mine! His concept for that was to be able to give the audience something to 'grab onto', with the odd time signature. That's brilliant!

Given that you did much lengthy touring with Sting, is there any artist now that could tempt you to go back on the road, for musical reasons?

That's tough! After Sting, it's like, where do you go? It depends on what you want and whether it's Jazz, or Pop. It really was the pinnacle of sorts working with Sting, especially in the early years with the four of us. It was really magical. He is so unique and such a brilliant artist.

Faith Hill got me out for her shows and I had a great time working with her. She's a great singer, wonderful person and respectful to all. And, I totally back her up on her values. That makes a big difference. Faith and her husband Tim McGraw are wonderful people and I have the utmost respect for them.

Do you ever get nervous before you play? 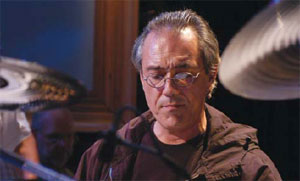 Rarely, but sometimes. I just want to be the best I can be for the music and the artist. Recently, I had the tremendous honour of paying tribute to the great Steve Gadd at a concert for him in Boston. I was nervous enough, being there for Steve, but then, I made the mistake of looking out into the audience right before I went on to play, and saw that Louie Bellson, Roy Haynes, and Elvin Jones were there! I can't recall the last time I was ever that nervous. I mean, those guys are among my heroes, and encompass a very significant part of the entire history of jazz, and drums!

I don't really concentrate on having unlimited facility anymore. I stopped concentrating on being the 'fastest gun' a long time ago. I realized that there will always be someone faster, or whatever, but, did it really matter? I saw through gaining experience playing and making music that, I had to be the best that "I" could be, for different reasons. Not be necessarily 'better' than someone else. I had to ask myself, 'better-by what criteria'? Someone might easily and cynically answer, "all of them". But, I say in response to that, "preposterous"...you need not only more experience, but an attitude adjustment as well!

It's extremely difficult to articulate how I felt, and how one realizes this sort of thing; you really have to discover it for yourself. You either 'get it' or you don't. It's really a part of your journey growing into musicianship....'mature musicalhood' as it were. It's really about understanding the laws of music. Talent, and the way it is displayed and communicated comes in so many forms. I saw and recognized that, and went, "AHA"! I had an 'aha' moment. And, I saw that it was so beyond fireworks, and so beyond the ostensible, and so beyond what people seem to want to feed insecure egos, and so beyond what gets shoved down society's throat by the media, and I realized that I saw truly gifted people who had the ability to recognize it, and when they saw someone else that also recognized it, there was just a sort of 'quiet recognition' of each other. Because they knew that if they tried to convince others of the profundity of what they recognized, it would just be futile.

I, obviously then had to ask myself, "well, does that mean that I'm gifted too"? And, I decided not to answer it.

Sometimes, I feel like working on new things, but don't have the time. I have to be really moved by something, and have a reason to do it. I won't sit there and work on some sort of independence thing just because it's now the 'in' thing. But, if I like it, then I will. Ultimately, I have to know that I can use it in a valuable way. I respect all who have a passion for the instrument; drumming can be a very transcendental phenomena.

All that I am saying is, I think we are inundated with a 'sports' attitude a little too much, with a deficit on the art. It is an art. It is not a sport, regardless of the physical ability needed to play it. Fostering a competitive nature surrounding the instrument is something that saddens me. I prefer cooperation. God bless all who drum!